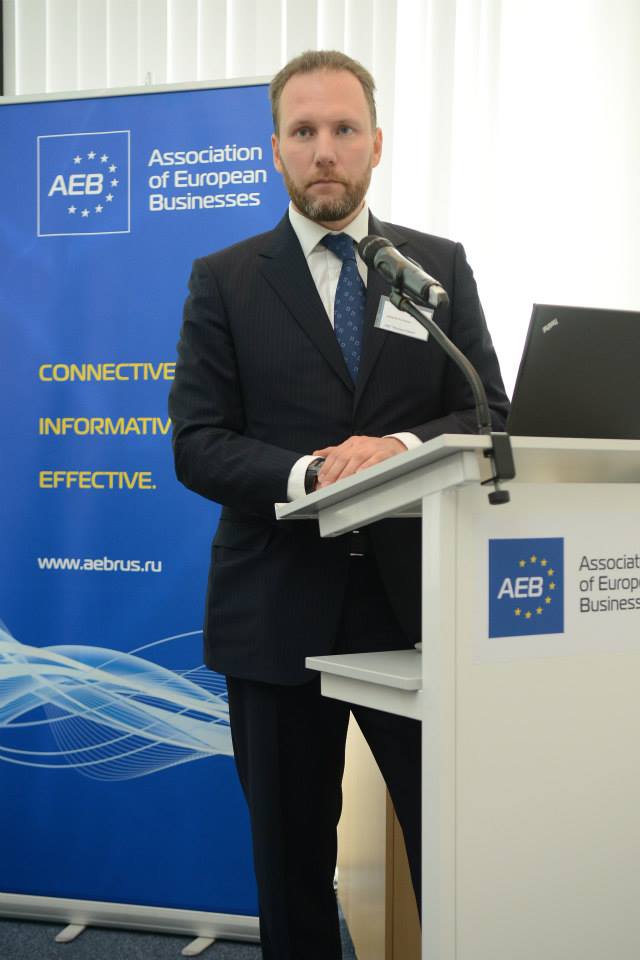 Philippe Pegorier, Chairman of the Board of the Association of European Business opened the meeting with European business.

“We have already known the Sverdlovsk region well – here is worked many European companies successfully, is created infrastructure for development business, the region has big potential. We consider Sverdlovsk region interesting for cooperation,” Philippe Pegorier said. He added that AEB doesn’t approve all sanctions restricted business in Russia.

Evgeniy Kuyvashev is expressed confidence in positive perspectives of work with European companies within the framework of presentation.

“I consider, one of the most important focuses of our cooperation with members of Association of European Business is modernization of the production and introduction of new technologies. Whereas the Sverdlovsk region opens up to you not only the market of the Urals, Siberia and the Far East, but also gives access to the markets of the Eurasian Economic Union and the countries of Central Asia due to favorable geographical location and logistics,”- said the governor.

In the Middle Urals is introduced special mechanisms of attracting investors and manufacturers of high-tech products, is provided tax incentives and regional benefits to bring to implement modern innovative projects of foreign business.

Alexey Orlov, First Deputy Prime Minister - Minister of Investment and Development informed about the biggest project of the region – SEZ “Titanium valley”. SEZ has already attracted foreign investors. “Thus, customs duties and VAT for imported equipments and components for further processing are zero. Property tax, land tax, transport tax are zero. Profit tax is 2% during the first 10 years from receipt of profit, 7% - from 11th to 15th years, 15,5 – from 16th year instead of 20% common used in Russia. All approvals are to be taken during 3 months instead of 2 years common used in Russia.” – said Aleksey Orlov.

Among the first residents are companies with a worldwide reputation. VSMPO-New Technologies (OJSC “Corporation “VSMPO-Avisma”) with project of organization of mechanical processed forgings for aviation application of titanium alloys. American company Praxair Titanium valley with project of construction of high technology industrial gas filling station. July, 2014 the Memorandum of Understanding (hereafter – the MOU) was signed at the Farnborough International Airshow between 3 parts: Figeac Aero (the French company, providing precision mechanical processing of titanium items for aerospace sphere), “VSMPO-Avisma” Corporation and the SEZ “Titanium valley”. The MOU touches the possibility of industrial cooperation development in aerospace sphere, including close collaboration in machining, finished parts and subassembly of titanium parts.

Moreover, the Agreement of Intent between State Corporation “Rostekhnologii”, Mitsubishi Heavy Industries Environmental & Chemical Engineering, the SEZ “Titanium Valley’ and Research & Development Enterprise “Mashprom” was signed during the biggest Russian industrial exhibition “INNOPROM 2014” . This agreement sets forth the intention of the sides to create several plants for solid domestic wastes gasification and melting on the territory of Russian Federation. One of these plants is supposed to be constructed on the territory of the SEZ “Titanium valley”.

Also, on the event is discussed another recent trend, market-related machine tool and manufacturing tools. "A huge quantity of equipments operating in Russia is manufactured in Europe. Earlier, the most of exploiters of machines was buying it directly from the manufacturers in Europe. Today we have the risks that our companies will buy machines in Republic of China because of political situation.” That is why location of production of production equipment and components for mechanical engineering and metallurgy in special economic zones today is more profitable for European companies. 10.11.2014