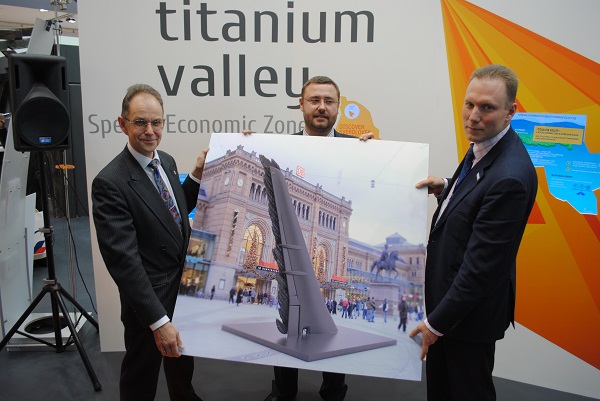 Managing Company of Titanium Valley SEZ came forward with an unusual initiative and offered the Hannover Mayor’s office to erect a monument to the chemical element of titanium, which was discovered by Martin Heinrich Klaproth, a German chemist who lived in Hannover. The sketch of the sculpture, a finned airplane tail made of titanium, was created by Tim Radya, a famous artist from the Urals region, and was presented at the Hannover Messe Exhibition on 10 April.
The sculpture which was offered as a gift to Hannover by Titanium Valley is unique, first of all, because it will be made of titanium. There is only one titanium sculpture presently existing in the word, the famous monument to the first cosmonaut Yuri Gagarin in Moscow.
“We are happy to have the opportunity to present the sculpture of titanium to Hannover, it is not only a sign of cooperation between our countries and cities, but also a cultural artifact which will be appreciated by the tourists from Russia and other countries”, commented Artemiy Kyzlasov, General Director of Titanium Valley SEZ OJSC, on the initiative at opening of the sketch at the Hannover Messe Exhibition.
11.04.2013