Boeing and the Russian corporation VSMPO-AVISMA will start the second co-production in Russia in 2018. 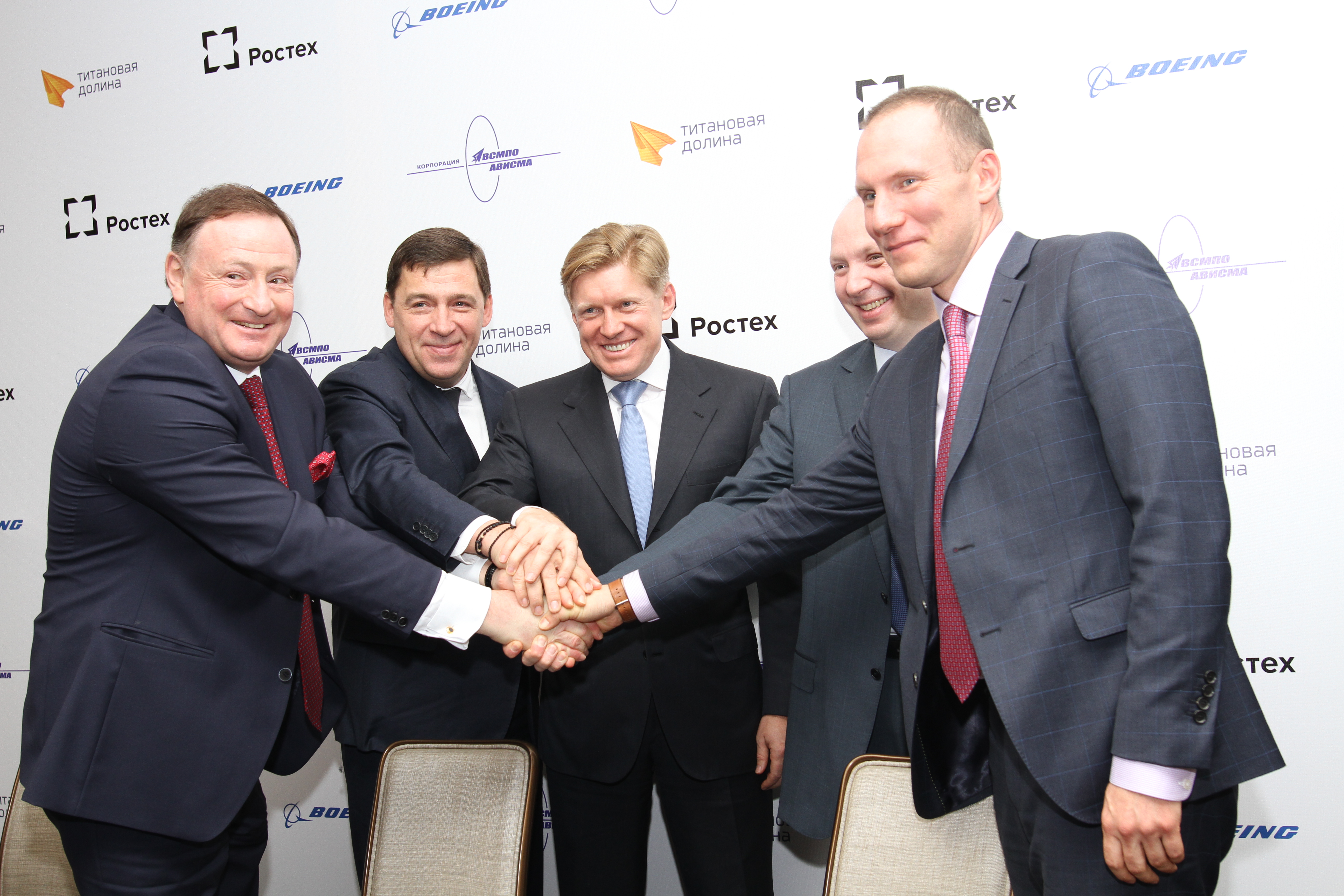 Boeing and the Russian corporation VSMPO-AVISMA will start the second co-production in Russia in 2018.

Sergey Kravchenko – the president of Boeing CIS and Russia and CEO VSMPO-AVISMA Mikhail Voevodin announced the launch of Ural Boeing Manufacturing in the presence of the Governor of the Sverdlovsk Region Evgenij Kujvashev at the press-conference on December 21st.

Mechanical processing of titanium stamping for all of the programs for Boeing civil aviation including 787 models, 737 MAX and 777X model (which is planned to be put in production for the 2017) will take place at the territory of the Special Economic Zone “Titanium valley”.  In a year’s time the production of the fuselage parts, aircraft wings parts, pylon elements, wheel train parts will be launched. The new factory will employ 230 people.

The new production will be situated in the facilities of the SEZ “Titanium valley's” resident VSMPO-New Technologies” which is now being built at the land plot of 9,5 ha. The only founder of VSMPO-New Technologies” is the Corporation VSMPO-AVISMA. The building took it’s start in 2014 and nowadays construction of a new factory of 19450 m2 has already come to its second stage. The steel work erection, the administration building and the thermal envelope have already been completed. The crane-boom equipment is now installed in the workshop, the boiler-room is fully constructed and all of the off-side utilities are plagued in. Though the internal works such as building services systems and fundament grouting are still required and are now being completed. The end of construction is planned for September 2017.

“We act together with Boeing and strive for being helpful and supportive for each other in producing the technologically advanced product” – commented Mikhail Voevodin – CEO VSMPO-AVISMA. – “Our decision on production expansion is very significant. It opens the new perspectives for the third decade of  our productive cooperation”.

Boeing, represented by JSC Ural Boeing Manufacturing, has already ordered the machine units and tools from the USA and Japan. The start of suppling is planned for autumn 2017. The launch of production is planned for 2018.

“We happy to have passed the one more milestone of our development and strengthen the partnership with VSMPO-AVISMA, – Sergey Kravchenko CEO Boeing CIS and Russia commented. – For more than 20 years we have been collaborating closely striving for rising the productivity for Boeing aircrafts. The production site at the territory of SEZ “Titanium valley” will be the most up-to-date and technologically advanced”.

Ural Boeing Manufacturing 2 will get the status of the Special Economic Zone “titanium valley’s” resident in the beginning of 2017. The project of a joint-venture had been approved by the Advisory board in May 2017 and by the Expert board of the SEZ “Titanium valley” in December 2017.

“It is very crucial for the Special Economic Zone “Titanium valley” that Boeing and VSMPO-AVISMA has announced the launch of their co-production today. This year has been very important for “Titanium valley” as we’ve finished construction of the infrastructure. We are headed for the active investment stage since 2017.

No doubt UBM-2 project is long-hoped-for. First of all It a significant step towards the industry specialization of the SEZ “Titanium valley” and a good starting point for its’ development. SEZ “Titanium valley’ is a place where titanium is not just a raw material but a product with a high added value. UBM2 is here to prove that. Secondly co-production of such industrial giants as VSMPO-AVISMA and BOEING has to become a signal for other international companies and prove that there is one more point of attraction, one more possibility for effective investment in Russia in the Sverdlovsk region. We are ready to provide all the necessary facilities and conditions for businesses to expand their production and develop in Russia”.

Evgenij Kujvashev, the Governor of the Sverdlovsk Region:

“Having the production site of such an international giant as Boeing is a sure chance for success for any country, any region and any Economic Zone. We consider the launch of the second co-production of Boeing not as a gift of the destiny but as a result of a very effective work on of titanium industry development, increasing the quality of the products, stuff-training and regional investment climate improvement. I believe SEZ “Titanium valley” and Boeing has just come to a long-term productive collaboration!”.