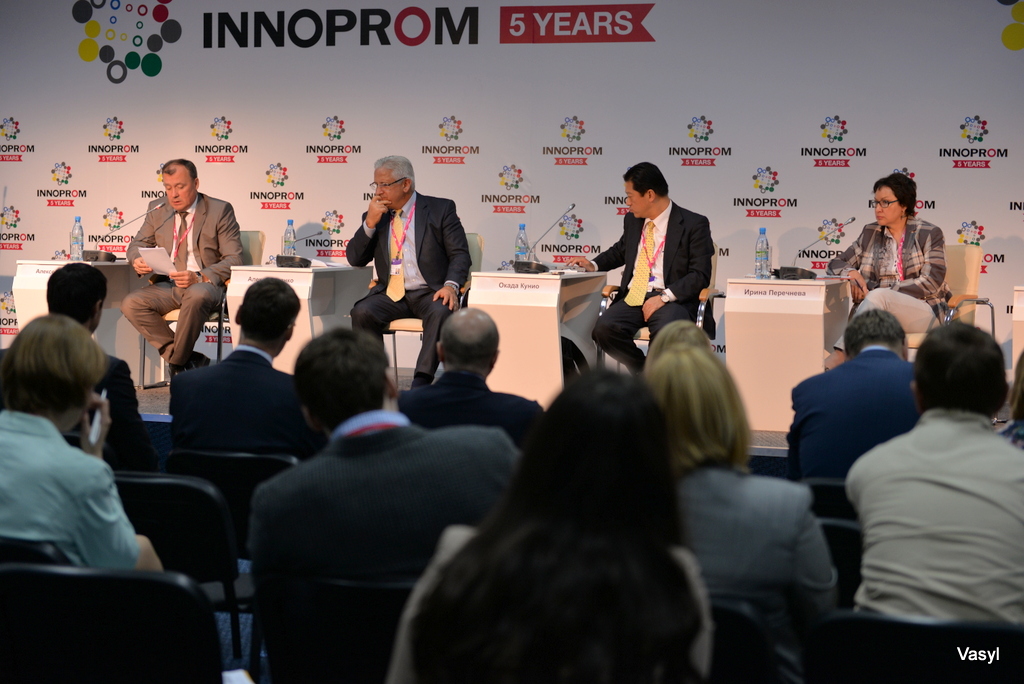 Titanium Valley SEZ, as part of the business program of the Innoprom 2014 exhibition, organized a seminar on “Cooperation as a factor for increasing industrial enterprises’ competitiveness”

In the course of this event, representatives of business and industry associations discussed the prospects for creating joint ventures on the territory of the Russian Federation, and shared experiences of interacting with foreign partners.

Alexey Orlov (Deputy Chairman of the Sverdlovsk region government), among other factors providing growth in the investment attractiveness of the region, pointed out the rich natural, human and intellectual potential, convenient geographical position and well developed transport infrastructure of the area. Orlov emphasized the importance of special economic zones and their contribution to the development of international cooperation: “Such projects as Titanium Valley are high priorities for the region”, he concluded.

In discussing the factors influencing decisions by foreign companies to locate their production in the Russian Federation, the tone was set by Alex Rodzyanko (president of the American Chamber of Commerce). He gave an expert appraisal of the Sverdlovsk regional market from the point of view of its attractiveness to American companies, pointing out its considerable industrial potential. According to Mr. Rodzyanko, American investors are scared off by Russia’s large size, its remoteness from the USA, and by the existence of fixed stereotypes between Russia and America. “For effective interaction, it is necessary to overcome mutual prejudices. Those American companies which have managed to do so are very successful on the Russian market.”

Okada Kunio (director of the Japanese institute of economic research in Russia and the CIS) greatly appreciated the tenfold growth of Russian-Japanese trade turnover from 3.5 to 35 billion dollars a year (for 2012), pointing out the narrowness of trade types between the two countries which exist today. According to Kunio, 40% of Japanese imports to the Russian Federation are down to cars. 70% of Russian exports to Japan are oil and gas. Breaking this trend is possible only by diversification of industry components accounting for investment revenue. Also, he noted that for more successful cooperation between Russian and Japanese businesses, cultural and mental differences between the countries must be overcome.

Speaking about the creation of joint venture practices, Sergey Lednov (Director for Business Development of the VSMPO-AVISMA Corporation OJSC) gave the example of joint venture activities between VSMPO-AVISMA and Boeing’s Urals Boeing Manufacturing corporation. He said: “Complicated, multi-component manufacturers are often given to outsourcing”. According to Lednov, in order to become a long-term partner of a large international company, suppliers should produce hi-tech products with a considerable value-added cost.

Deputy Director General of Titanium Valley SEZ OJSC Andrey Antipov, summing up the results of the meeting, commented that investments are not only the money invested in the production development of any region. Investments are also the ability to create a chain of favorable inter-relations on the part of raw materials procurement, and product marketing through production localization. 11.07.2014