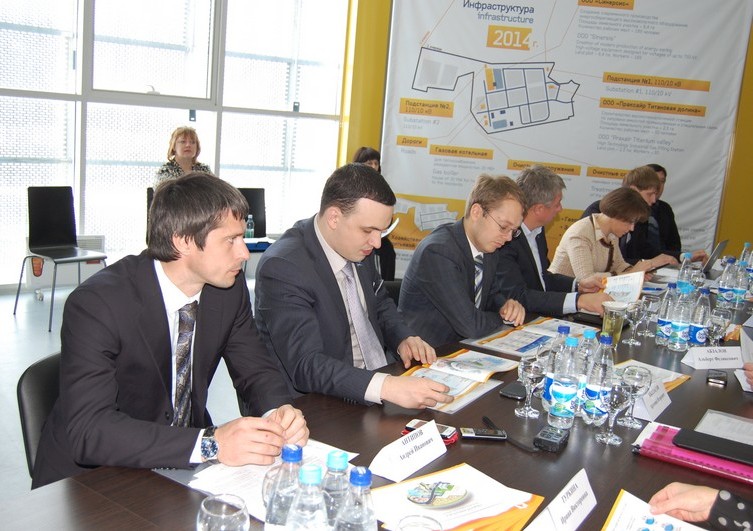 25.04.14. Deputies of the Legislative Assembly of Sverdlovsk region gathered on the site of the special economic zone.

An extraordinary meeting of the Legislative Assembly Committee on industrial and innovative policy and entrepreneurship was held on 24 April 2014 on the site the Titanium Valley SEZ
The meeting was attended by the deputies of the Legislative Assembly of Sverdlovsk region, representatives of public authorities, the administration of Verkhne-Saldinsky urban district, as well as by representatives of resident companies.
The planned issue of the day’s agenda – progress of execution of works in the “Titanium Valley” special economic zone.
The visit began with an inspection tour. Artemy Kyzlasov, Director General of “Titanium Valley SEZ” OJSC, showed the visitors around and commented upon the construction progress of the main infrastructure facilities in the special economic zone – the external gas line, production/fire-protection and potable water mains, as well as the civil construction plans for the current year, because readiness of infrastructure items is one of the basic conditions for residents entering the site of the special economic zone.
Are the construction works schedules being observed? What is the efficiency of budget investments? What was the basis for choosing the site? How is the economic and political situation in the world affecting residents’ intentions? How will personnel be prepared? How is project financing going? Is the attraction of private investment possible? Who is the resident now, and at what stage are the works? Discussion of project realization matters started on the excursion bus, and gradually moved to the site of the special economic zone.
As A. Kyzlasov explained, construction of infrastructure facilities and site development is progressing at a pace allowed by current financing. At present, the project is financed only from the regional budget, and so there are some delays to the building schedule. Federal resources, of course, will allow project realization to speed up, but to make that happen, regional financing liabilities need to be implemented in full.
Sergey Lednov, director for business development of VSMPO-AVISMA Corporation OJSC, who is the project realization supervisor for the project resident “VSMPO-New Technologies” LLC in the special economic zone, confirmed that infrastructure construction rates, in many respects, define the activity of residents. “Last year we saw that construction of infrastructure facilities and site preparation works had moved into the active phase. Accordingly, from our side, we have updated our business plan, and now intensive works for project development are in progress. We are planning that by the middle of 2015, all necessary services will be brought to our site, and the production building will be constructed. We hope that financing terms and construction rates will be maintained”.
But how, considering the uneasy economic and political situation in the world, are relations with the Boeing Corporation being maintained? This question in one form or another interested all the guests at the meeting.
Artemy Kyzlasov explained that at present, they are discussing matters in detail with the Boeing Corporation: calculations of cost and options for building industrial facilities on the site of the special economic zone are ongoing. It is expected that a decision will be made at the end of May at the meeting of the Corporation Board of Directors. Sergey Lednov has also confirmed that the Company, for its side, is working over the project, and is conducting consultations with Boeing concerning, specifically, its choice of equipment.
The possibility of attracting off-budget means and private investments to the project is one more issue which was discussed in detail by participants at the meeting. Representatives of the deputation, for their part, expressed readiness to actively promote the solution of this matter.

Summing up the results of the meetings, the chairman of the committee of the Legislative Assembly on industrial and innovative policy and entrepreneurship, Albert Abzalov, proposed to the deputies to recommend that “Titanium Valley SEZ” OJSC continue works on achieving the target values of efficiency indicators for functioning of the special economic zone, and attraction of residents and other investors, including for activities to implement the SEZ’s infrastructure facilities; the Government of Sverdlovsk region should adhere to the project financing plan for 2014-2016 approved by the Law on the Sverdlovsk region budget. 25.04.2014