The Sverdlovsk region falls within the top 10 regions of Russia that produce around 50% of the country’s industrial output. The region is rich in natural resources, and possesses a large diversified industrial complex, and considerable scientific and staffing potential.
Sverdlovsk region is located at the crossroads of major transport arteries connecting Europe and Asia, and is the third transport center by size in Russia.
The basis of the regional economy is mining and metallurgical enterprises. In the region, such industries as recovery of uranium and nonferrous-metal ores and mechanical engineering are also well developed (see the map of industrial enterprises distribution in Sverdlovsk region).

Stable economic growth makes Sverdlovsk region attractive for many local and foreign investors. Vivid confirmation of the favorable investment climate is provided by international investment projects carried out in the region in different industrial sectors, such as production of electric locomotives (Siemens AG and the Sinara Group), cement (Dyckerhoff and Sukholozhcement), titanium alloy parts for planes (Boeing and the VSMPO-AVISMA Corporation), etc.

82.8% of  processing industries in the Ural Federal District are concentrated in the Sverdlovsk Region.

The Sverdlovsk region is a leading  region in production of certain types of products and raw materials within Russia. 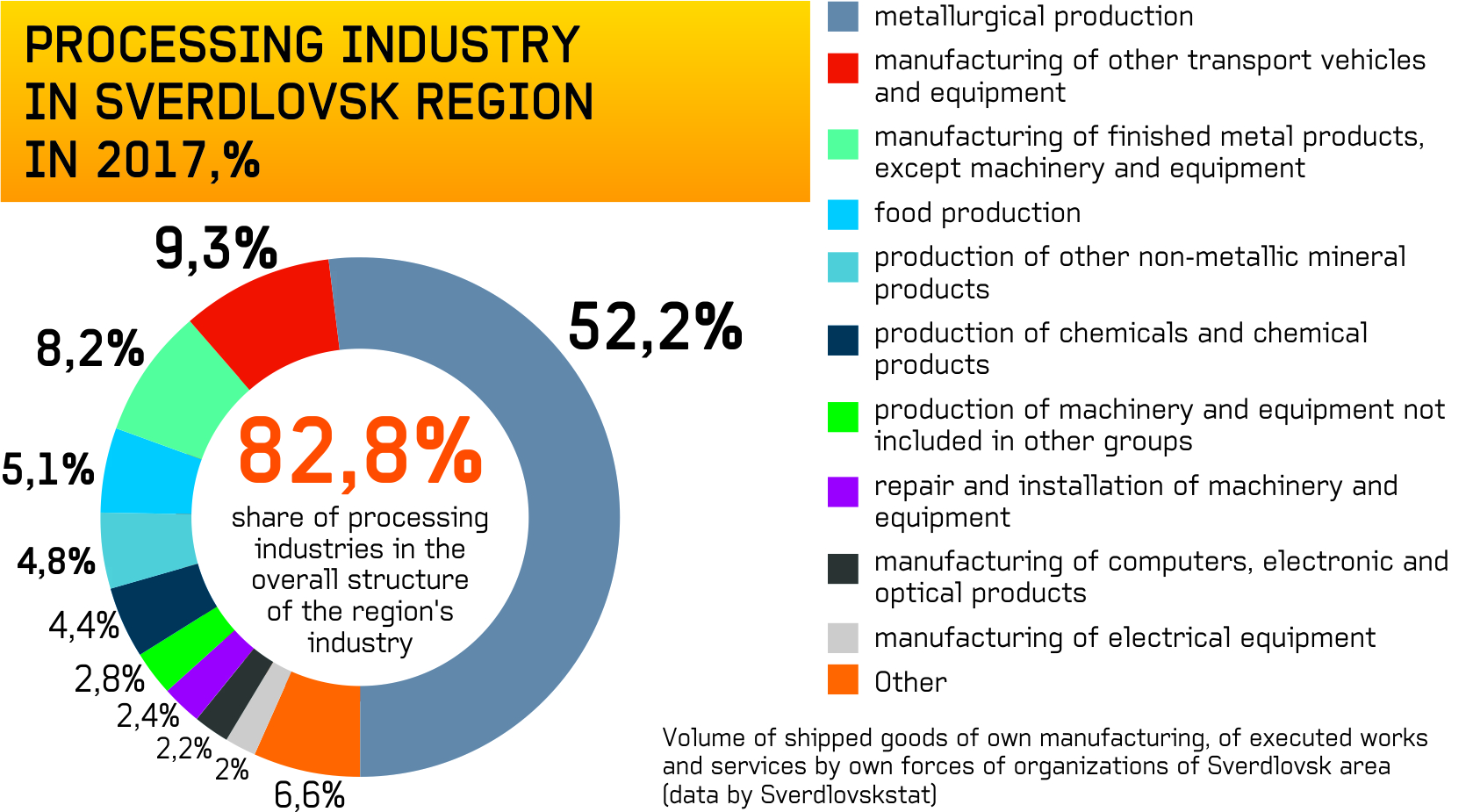 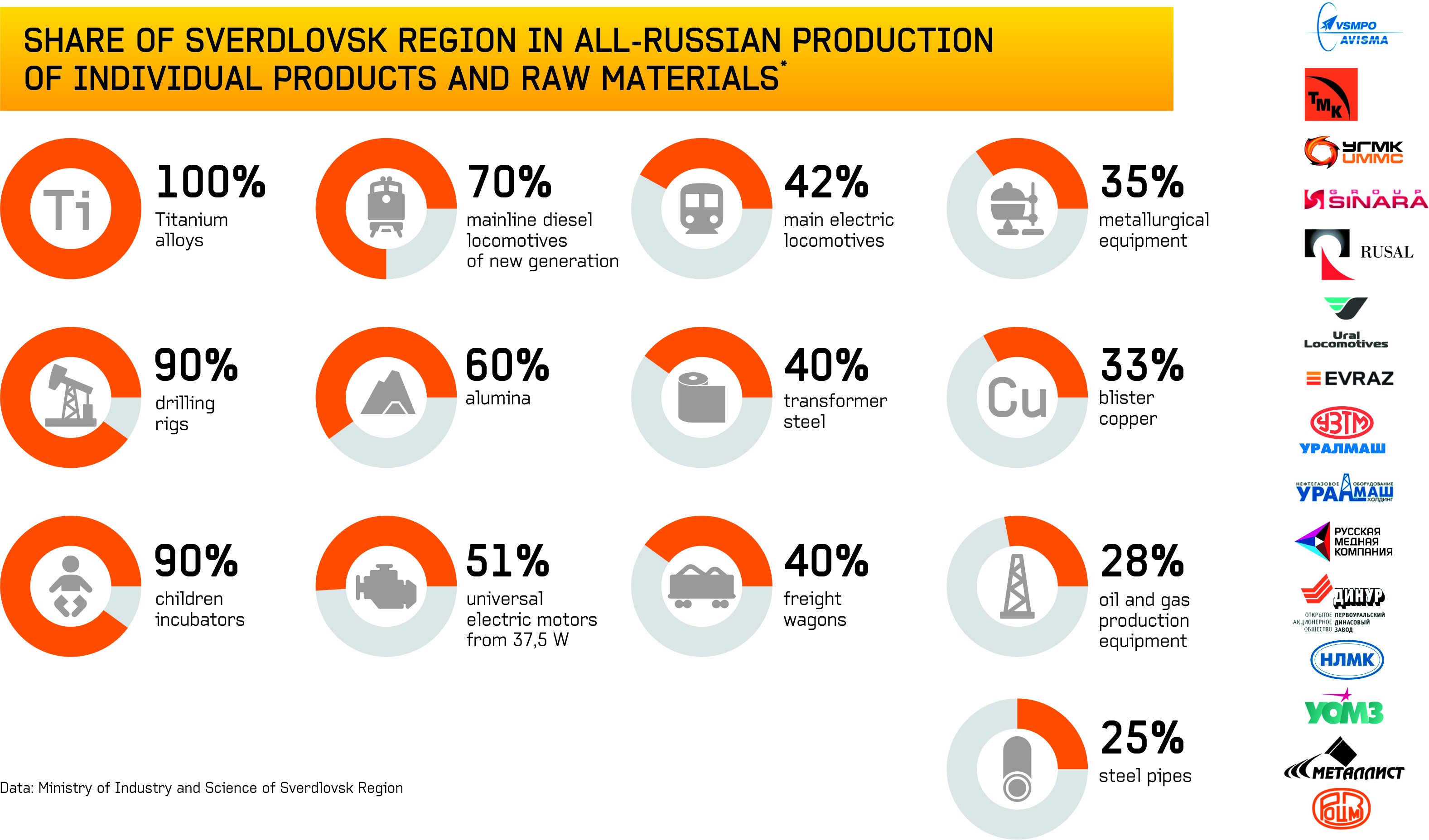 Unique possibilities for industrial cooperation have been created in the Sverdlovsk region.
Here we have such enterprises as

According to the majority of the main social and economic
indexes of development, Sverdlovsk region is
among the top ten regions
of the Russian Federation. It holds:

PROXIMITY TO THE WORLD TITANIUM MANUFACTURER

THE INVESTMENT AND INDUSTRIAL POTENTIAL OF THE REGION

Titanium Valley is based in Sverdlovsk region – a large scientific, industrial and infrastructural center of Russia (go to section about the region).
Residents have the opportunity to fit into existing industrial chains of the Sverdlovsk region and its adjoining territories. This allows them to fill the existing free niches of the Sverdlovsk and Urals region markets and provide a sales market for residents’ enterprises.

Residents of Titanium Valley SEZ are exempt for 10 years from payments of property tax for organisations, transport tax, land tax; and also from profit tax which should be paid into the regional budget for 10 years after receiving their first profit liable to taxation. As for profit taxation, Titanium Valley is the most attractive of all other SEZs in the Russian Federation (give more details about tax preferences).
Furthermore, for SEZ residents, special tariffs exist for gas, electric energy, heating, water supply and sewerage, and also for the cost of rent and land redemption.
For SEZ resident enterprises, protection against adverse changes in Russian Federation Law on taxes and levies is guaranteed during the whole period of validity of the special economic zone (49 years).

On the territory of a special economic zone, the customs procedure of a “free customs zone” (further – FCZ) shall apply.

On application of the “free customs zone” in relation of goods imported to the SEZ territory (equipment, raw materials, accessories, construction materials), the resident shall not pay import customs duties or value-added tax.

Titanium Valley SEZ OJSC, together with Verkhnaya Salda customs provides support in explanation of the customs law and the use of the free customs zone procedure.

CONDITIONS FOR CONSTRUCTION AND MAINTENANCE

The maximum simplification of administrative procedures at all stages of the resident’s activity at interaction with public authorities and local government.
The “single window” system allows quick and efficient solution of issues connected with construction and current industrial activities.

Using special Titanium Valley SEZ preferences allows a reduction of up to 30-40% of costs of location of economic activities as compared to expenses for construction on sites other than the special economic zone.